A lot of projects are happening at work, the most important being our first client webinar. I've done many webinars before, but I'm nervous about this one because instead of using a service that completely runs the webinar for you, we are doing it by hand using GoTo Webinar. This makes me nervous because I am the one arranging, marketing, and ultimately running the technology for it.

I am not technologically savvy at all.

So yes, stress. That people will show up. That the technology won't fail me. That the content will be interesting.

And if we're successful? a brief glow, and then I get to do it all over again each quarter.

Not to mention the other 50 million projects that I have going on. That are also recurring. And then there's my favorite time of year: budget planning. Help me Jeebus.

Don't get me wrong -- I'm excited to have projects, to be busy, to have a job. But ... stress. I can never seem to operate without massive amounts of it; I've told people before that I feel like my stress levels are my down payment for a successful project. If I don't completely stress out, then karma will make my project suck. It's weird and stupid, but it's worked for all these years--why question the method now?
Posted by Freakin Happy at 6:12 AM No comments:

My Weekly Therapy Session is Back ... 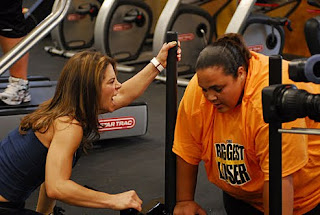 The new season kicked off last night and as usual, there are some seriously overweight people with some serious problems. I couldn't help but tear up hearing Abby's story: She lost her husband, 5 year old, and 2 week old in a fatal car accident. I told my husband that I would not only be heavier than her if that happened to me--I would be dead and gone. How do you come back from that, much less decide to put yourself through this show? She is amazing.

Of course I had to do the "How do I stack up to the women?" when it came time for weigh-in. I'm happy to report that unlike last season, which started back in January 09, I am officially lighter than the starting weight of every female contestant this season.

It seems dumb, but that was a big motivator for me. My husband and I joke that we gain weight during TBL because the extreme workouts, crying, and drama just make you want to sit down and binge sometimes. Happy to say, I did not have cookies this time (though I did have a few cups of low-fat popcorn). And as I watched these people sweat their way through their first workouts, I was both admiring and grateful. Because I remember what it was like to be wheezing and sweating and wanting to die after 15 minutes. I'm grateful that even though I am the slowest jogger on earth, I'm doing it anyway and I'm getting better at it.

This season will be interesting; I'm hoping I can continue to stay ahead of the women for as long as I can. Too bad I don't have a Jillian to scream in my face.
Posted by Freakin Happy at 6:01 AM No comments:

So after my awesome breakthrough/empowerment/hear me roar/blah blah, I took a week off from jogging.

Why? Because I'm lazy/busy with other things.

But I was back to it yesterday, with the gripping fear in the back of my mind that I have only about 2 more months until I have to JOG IN FRONT OF OTHER PEOPLE.

Yep, the motivation was back, big time.

Otherwise, life is toodling along: Summer's almost officially over, I'm training for this 5K, trying not to get buried at work, and doing a little dance now that football is back in my life.

And I'm waiting on some GMAT study materials. I still want to do it, gripping fear or not. I seem to be doing a lot of staring-into-fear things lately.
Posted by Freakin Happy at 6:43 AM No comments:

Labels: fall, family, treadmill, what am I getting myself into?, work, working out

I was dreaming, but can't remember about what.

My mom bursts into my old bedroom and wakes me up: "Does Tom's mom still work in New York City?"

"A plane just crashed into the World Trade Center. It's some weird accident ... it's clear out today."

Get up, throw on clothes, look at the TV. I make my mom sit down -- I'm at my parents' house to help my mom after her surgery. We're the only ones home; Tom is working in DC and my Dad is on his way into work at HUD.

Diane Sawyer is talking about how the plane crash could happen; it's a beautiful day out, what's going on?

The camera is fixed on the the towers. The running commentary continues. I see something come in from the side of the shot: "Wait, what's that?"

My mom knew immediately that it was an attack. I suppose after all those years working in DC with government agencies, you almost expect it? It still wasn't sticking with me, until the panic set in.

My dad. My boyfriend. Both in the DC area. Mom and I couldn't get a call through until several minutes later; luckily, she caught my dad on the way to work and he turned around. Tom was stuck in Bethesda and couldn't leave because he took Metro. I irrationally yelled at him to get to Stafford as quickly as he could.

The next shot on the TV was of smoke pouring out from behind the OEOB. ABC-7 News realizes it's the Pentagon that's been hit. There's yet another plane. Hell has officially broken loose.

In the end, Tom managed to make it down to my parents' house, as did my dad. We watched the news constantly. I cried harder than I've ever cried. I remember the signs, so many signs, that loved ones made for those who were supposedly missing. I remember the fiancee on the news asking anyone to call her if they saw/found her fiance. He worked at Cantor Fitzgerald, she said.

I thought about our apartment and its proximity to National Airport--would it even still be there when we came back? An irrational thought, but that day, it seemed like anything could happen. I remember the sound of helicopters flying over my parents' house on their way to Quantico. Tom telling me that when he went past the Pentagon stop it just smelled like burned ... everything. I remember being more scared of DC, a city I loved, than ever. DC, the many-time murder capital of the country, and NOW I was afraid.

I managed to get over the fear enough to take a job one block from the White House. I started work on September 17, 2001. I eventually fell in love with DC again. Tom and I got married there; our favorite wedding picture has the Capitol in the background. I still think of it as my "home" city, even though I've now officially lived in Charlottesville longer.

Today I'm thinking of my home city and everyone in New York. I hope that we've all found some sort of peace, in our own way.
Posted by Freakin Happy at 5:46 AM No comments:

I'm Taking the GMAT Next Year.

Hoping that now that I've said it, it will happen. And that I will manage to not embarrass myself.
Posted by Freakin Happy at 7:31 AM No comments:

Labels: GMAT, plans, what am I getting myself into?, work
Newer Posts Older Posts Home
Subscribe to: Posts (Atom)